NAME; Clawson, Alexander
RANK; Corporal
SERV. NO; 12/17364
UNIT/SERVICE; 12th Battalion
REGIMENT; Royal Irish Rifles
BORN; Carrickfergus 1892
LIVED; Irish Quarter West, Carrickfergus
ENLISTED; 15 September 1914, Carrickfergus aged 24
FATE; Survived the War
CEMETERY; N/A
CHURCH; St Nicholas Church of Ireland
MEMORIAL; N/A
REMARKS; Alexander was born in Carrickfergus in 1892 the son of John and Henrietta Clawson and brother of Lizzie, Maggie, William (also served with 12th Battalion) and John.  By 1901 Alexander was 12 years old, living with the family in Irish Quarter South and working at the local mill.  He married Lettice Ethel Burgess at St Nicholas Church 6 February 1910 and shortly after moved in with his mother and father in law to their house in Irish Quarter West.  Alexander and Lettice had 3 children, Alexander Jnr born 29 October 1910, Elizabeth 16 March 1916 and ? born 1 April 1919.  Prior to the war Alexander was working as a general labourer and was a member of the Central Antrim UVF.  On 15th September 1914 at Barn Mills School he enlisted into the 12th Battalion Royal Irish Rifles.  Following training he was posted to France for active service in October 1915.  He served across the Western Front from the end of 1915 until 12 August 1918 when he was returned to the home service and finally demobilised on 1 August 1919 by which time he was with the 3rd Battalion.  He was promoted to lance corporal on 7 February 1917 and then to corporal on 4 November 1917.  Twice wounded, firstly 11 August 1917 with a gunshot wound to the back and then on 18 April 1918 with a gunshot wound to the right arm.  On both occasions he was patched up and returned to active service following a period of recovery.  After the war he returned to his home on Irish Quarter West and went back to work as a labourer raising his young family. 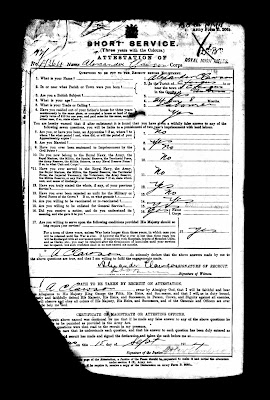 NAME; Clawson, William James
RANK; Rifleman
SERV. NO; 18911
UNIT/SERVICE; 12th Battalion
REGIMENT; Royal Irish Rifles
BORN; Carrickfergus abt. 1893
LIVED; Irish Quarter South
ENLISTED; Belfast Town Hall, September 26 1914 aged 21
FATE; Survived the war
CEMETERY; N/A
CHURCH; Church of Ireland
MEMORIAL; N/A
REMARKS; Born in Carrickfergus 1893 the son of John and Henrietta Clawson and brother of Lizzie, Maggie, Alexander (also served with 12th Battalion) and John.  In 1901 he is listed as a school boy living with his family in Irish Quarter South.  The entire family were members of St Nicholas Church of Ireland.  By 1914 William was living with the family in Wilson’s Place, working as a labourer in the salt works and was an active member of LOL 947.  When war broke out he enlisted into the 12th Battalion Royal Irish Rifles in September 1914 at Belfast Town Hall.  His medical records report him to be 5 foot 6 inches tall with brown hair, brown eyes and a tattoo of rose and flags on left forearm.
Following training he was posted to France on active service in October 1915 and had three tours to the Western Front until 1918 (3/10/15 – 8/7/16. 18/12/16 – 13/6/17 and 23/3/18 – 21/4/18).
His service record has a number of infractions throughout his time of service including being AWOL, resisting arrest following creating a disturbance while drunk.  He suffered a gun shot wound to the shoulder on 7 June 1917 during fighting at Messines Ridge and was sent to hospital in Belfast and Whitehead between 27 July 1917 and 13 August 1917.  On his return to duty he was transferred to the 18th Reserve Battalion.  He spent three months in Portobello Military Hospital Dublin between December 1917 and March 1918 with gonorrhoea.  Following this he was charged with desertion in June 1918, the war having clearly taken its toll on him.  In March 1933 while living in Davy’s Street he received a letter from the war pensions department informing him that his war gratuity had been forfeited as a result of his desertion and this would not change.  His trial for desertion was dispensed of and eventually he was recognised as being fully discharged from the army. 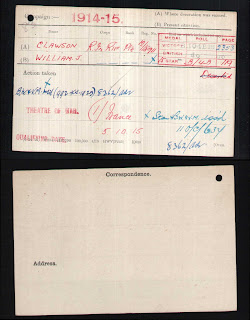