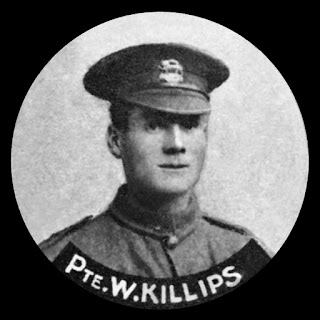 RANK; Private
SERV. NO; 25892
UNIT/SERVICE; 9th Battalion
REGIMENT; Leicestershire Regiment
BORN; Carrickfergus, 1891
LIVED; Stamford, Lincolnshire
ENLISTED; Oakham, Rutland, 11 November 1915
FATE; Killed in Action, France, 25 September 1916
CEMETERY; Body Never Recovered
CHURCH; Unknown
MEMORIAL; Thiepval Memorial (France) – Pier and Face 2C & 3A
REMARKS; William was born in Carrickfergus in on 31 August 1891 the son of Robert and Hannah Killips (nee McIlhagga) and brother of Cecil.  William left Carrickfergus when he was a young teenager and moved to Stamford in Lincolnshire with his family. Prior to the joining up he worked as a railway booking clerk.  Hen enlisted into the 9th Battalion Leicestershire Regiment on 11 November 1915 and following training was posted to Western Front 25 August 1915. He was killed in action at the Somme on 25 September 1916 aged 25. His body was never recovered and he is remembered on the Thiepval Memorial pier and face 2C and 3A. William’s brother Cecil was also killed in action.

The War Diary entry for the 25th September 1916 records.

The morning was spent in making final preparations for attack. Enemy shelling not heavy and a few casualties were sustained. At 12.35pm waves were formed up in front of trenches. At 12.37pm the advance commenced, “C” and “D” Companies in extended order, “A” and “B” Companies in artillery formation, enemy immediately commenced an extremely intense and deep barrage. At 12.45pm the first two platoons of “D” Company reached GIRD TRENCH, but sustained heavy casualties. All the Company officers becoming casualties, 2nd Lt A. E. PETER, 2nd Lt. W. S. GILBERT, CSM POTTERTON were all killed, 2nd Lt. CLARK was wounded. The remnants of the first 2 waves of “C” Company reached GIRD TRENCH, but owing to machine gun fire from the right, and the Brigade on the right, having failed to take GIRD TRENCH, the party were all killed or wounded. 2nd Lt. RENNIE was killed in GIRD TRENCH, Lt. HENWOOD was wounded. Captain WEBB wheeled the 3rd and 4th waves of “C” Company and formed a defensive flank down SUNKEN ROAD facing right. At 1.00pm Captain WEBB was wounded and CSM RHODES was killed. “C” Company suffered extremely heavy casualties from machine gun fire. “A” and “B” Companies advanced and established themselves in NEW TRENCH, BULL TRENCH and PATROL TRENCH and shell holes in the rear. Battalion HQ advanced from LEWIS TRENCH to PATROL TRENCH. At 1.37pm Captain ALLBERRY led “A” Company forward but was immediately killed by machine gun fire from the right flank. Lt. HARDY, 2nd Lt. LEWIS, CSM RICE and many of Company becoming casualties through the same cause. Lt. Col. HAIG was wounded in the arm in PATROL TRENCH. At 1.37pm Battalion HQ advanced to BULL TRENCH. At 2.00pm the remainder of Battalion HQ viz: Lt. Col. HAIG, Captain POPHAM (8th LEICESTERSHIRE REGT), Lt. TOOTH and 3 orderlies advanced to NEW TRENCH. Captain POPHAM and the 3 orderlies were wounded. At 2.35pm the advance hung up on account of machine gun fire and rifle fire. Enemy still occupying GIRD TRENCH on right of SUNKEN ROAD. Lt. Col. HAIG and Lt. TOOTH advanced to NEW TRENCH and finding it empty, crossed over to GOAT TRENCH. Only dead and wounded men were found in GOAT TRENCH, accordingly Lt. Col. HAIG and Lt. TOOTH in anticipation that the front two Companies had reached GIRD TRENCH, again advanced to PILGRIMS WAY where 40 other ranks of the 8th LEICESTERSHIRE REGT were found without any officer. Lt. Col. HAIG decided to remain and hold on with the 40 other ranks until reinforcements arrived to clear GIRD TRENCH on right. At 3.00pm connection with 55th Division in GIRD TRENCH on the left of PILGRIMS WAY was established. A bombing group of 8th and 9th LEICESTERSHIRE REGT was organised and bombed down GIRD TRENCH on the right of PILGRIMS WAY for 50 or 60 yards. Many of the enemy were killed and 12 were taken prisoner. Owing to the lack of bombs, a block was established, and a Lewis gun posted near the block. Lt. Col. HAIG sent numerous reports on the situation to Brigade HQ, only two of which reached Brigade, the orderlies being either killed or wounded. Heavy shelling all the time. At 8.00pm connection with Brigade was established through 2nd Lt. KELLY. During the night the ROYAL ENGINEERS constructed a strong point at N.32.a.1.9. The night was spent digging in and consolidating position. The enemy seemed to be working round behind PILGRIMS WAY, but did not attack. From zero (12.35pm) to 5.30pm, the enemy kept up a heavy and very deep barrage becoming intense at times.

Source: Michael Doyle Their Name Liveth For Evermore: The Great War Roll of Honour for Leicestershire and Rutland.