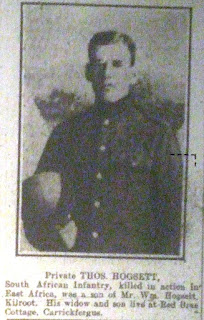 NAME; Hogsett, Thomas
RANK; Private
SERV. NO; 8854
UNIT/SERVICE; South African Infantry
REGIMENT; 7th Regiment
BORN; Carrickfergus, 19 April 1880
LIVED; Carrickfergus
ENLISTED; South Africa, 1814
FATE; Killed in Action 12 February 1916 aged 35
CEMETERY; Taveta Military Cemtery – Kenya V. A . 8
CHURCH; Presbyterian
MEMORIAL; N/A
REMARKS: Thomas was born in Carrickfergus 19 April 1880 the son of William and Margaret Hogsett (nee Crow) and brother of Annie, James, Lizzie, Jane and Samuel.  By the age of 21 in 1901 he was living on the family farm in Kilroot and working as a drapers assistant.  Thomas married Elizabeth Donald and together they had one son and moved into Red Brae Cottage around 1908. In October 1913 it appears Thomas travelled to Cape Town, South Africa from Southampton.  His reason for doing so is unclear but his wife and son do not appear on the emigration passenger list.  While there he joined the 7th Regiment South African Infantry and as a private and was posted on active service.  Thomas was killed in action on 12 February aged 35 in the advance on Salaita Hill.  He is buried in Taveta Military Cemetery – Kenya V. A . 8.
The Battle of Salaita Hill was the first large scale engagement of the East African Campaign of World War One to involve British, Indian, Rhodesian and South African troops.  The Battle took place on 12th February 1916 as part of the three-pronged offensive into German East Africa launched by General Jan Smuts who had been in overall command in the region.  This was a part of the Great War often forgotten about as it rarely affected those from our local area.  Yet here was a young man from Carrickfergus who ended up playing his part so far from home and ultimately made the ultimate sacrifice.