David was the son of William Loughins and Mary Jane Grey and brother of John, Hessie, Samuel, William and Thomas. The family moved around Antrim but both David and his brother were born in Carrickfergus and the family lived there from sometime between 1891 and 1900. David joined the Royal Irish Rifles around 1910 and at the outbreak of war in 1914 was one of the first to be sent to France as part of the BEF. 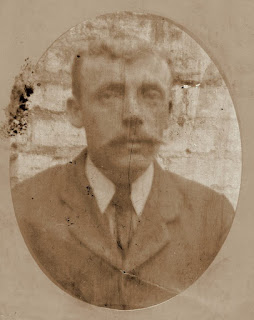 David served on the Western Front at the time of much described "Christmas truce", which was a series of widespread unofficial ceasefires that took place along the Western Front around Christmas of 1914. His war diary makes mention of this in the following passages:

[December] 24th 7pm.
After a very quiet half hour, I heard a voice from the German trenches (which are 100 yds away) shouting a Merry Xmas. So one of our fellows shouted back the same to you. Then the German shouted "You English soldier don't shoot. We want to speak to you". So we shouted, "Send one man half roads", which they did. So after they met, they saluted one another, the German saluting first. They gave us cigars in exchange for cigarettes and they said if we didn't fire, they wouldn't fire. So we agreed to stop firing till after Xmas considering they do the same. Someone on their side let off a round. but it didn't hit anyone and I am sure he got a rough time of it by the way they shouted at him. I think one of the Germans gave him an Xmas box.
Xmas Day

It froze last night and, as we had wet feet, we didn't get much sleep. But most of us kept shouting over to the Germans and they kept answering us until after midnight. All day today we were talking to our pals over the way and we even walked about over to their trenches and they gave us plenty of cigars and chocolate which I think is part of their daily rations. Most of them seem fed up with the war and they say that the war will be over and peace proclaimed about the end of next month. The fellow who was speaking to me says that they can't win as they are fighting too many and he said he was tired of the war. One of their Officers told one of our Artillery Officers that we were doing some good shooting and I am thinking he was about right. No shots were fired on either side today. We are keeping our Xmas fare until we go out of here tomorrow night. But I didn't do too bad today. Five of us mucked in and we had bacon and bullybeef fried for breakfast and for dinner we had a stew of bullybeef, spuds and preserved vegetables and for desert we made a pie of biscuits and marmalade jam. So all we wanted was a goose and we were tip top. I got a darling little goose's photo last night. So I enjoyed Xmas day so far.

[December] 26th
No firing on either side today. Johnny German must be very glad to get a rest, so are we.
David's last entry in his war diary was on December 28th. He received a serious wound from a sniper shortly thereafter. He was brought back to the field hospital at Estaires, France, but succumbed to his injury there on January 5th.

David's passing left his young fiance and family in mourning. In commemoration of the place where David passed, his eldest brother named his last-born daughter, Estaire, after Estaires, France. (Many thanks to the family for this information it is greatly received.)

David is buried in Estaires Communal Cemetery Plot: I. F. 11.
‪#‎WeWillRememberThem‬
Posted by Unknown at 11:29