REMARKS; John was born Carrickfergus in 1895, son of John and Ellen Wallace & brother of Jane, William, Agnes, Robert, Mary and Hugh.  He lived on and was member of Joymount Presbyterian Church.  During the war he served with the Royal Marine Light Infantry and saw action in from where he was invalided home and never recovered from his injuries. He died at his family home on on 22 November 1917. He received a full military funeral at with military escort and firing party from 6th Battalion Royal Irish Fusiliers.  His funeral service was conducted by Rev J.Y Minford.

REMARKS; William Holmes was born in Carrickfergus on 8 December 1892 the son of Andrew and Martha Holmes (nee Mackey) and half brother to Agnes, George, Gladys and Margaret (his mother died when he was a young child and his father remarried Sarah Moore in 1899).  By 1911 he was living in Ballyclare with his family and working as a cleaner at local bleach green.  He joined the 12th Battalion Royal Irish Rifles at Mossley in 1914 and following training was posted to France on active service in October 1915.  William was killed in action on 22 November 1917, his body was never recovered and he is forever remembered on panel 10 of Cambrai Memorial, Louverval (pictured). 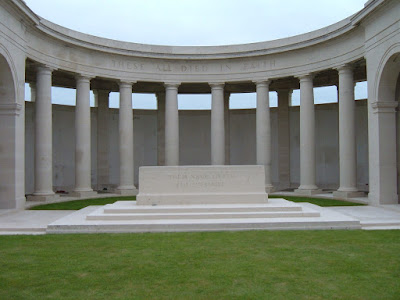 John was born in Whitehead in 1891, the eldest son of Mr William George Adams and Emily F. Adams (nee Wright) and brother to Alfred and Kathleen. Prior to the war he worked for three years as a bank clerk for the Ulster Bank. After that he went into business with his uncle, Mr. Alfred Adams of North Street, Belfast. John was a member of the Ulster Volunteer Force before he entered the Army.


John was commissioned into the Army on 12 July 1915 and was promoted to the rank of Second-Lieutenant in the 8th Battalion of the North Staffordshire Regiment. He saw action in France, beginning service there on 29 May 1916. He was killed in action in Grandcourt on Saturday 18 November 1916. Even by December the best information available to newspapers like the Larne Weekly Telegraph was that he had been declared missing by the War Office.
His mother had to endure an agonizing wait for the sad news about her son. It was September the next year before the newspaper reported that his body had been found by British soldiers and buried. His grave is in Grandcourt Road Cemetery on the site of Ancre Battlefield in France (pictured). In bitter fighting, German advances captured it and the allies pushed them back twice over during the War. In the confusion of the Western Front it could take months’ for men to be officially confirmed dead.

A memorial service in St. Patrick’s Church was told that John “took an active interest in everything pertaining to the welfare of the church. As a lad he was an example, and as a young man he was a pattern for others. For many years he was rector’s churchwarden of that parish [Templecorran]. A staunch and loyal friend, whose loss was well-nigh irreparable.” A memorial plaque in his honour was unveiled in October 1918 at St. John’s Parish Church, Islandmagee.

Michael was born in Greenore, Co Louth in 1886 the son of James and Bridget Hagan.  He married Dora Donnelly at St Anne’s  of  on 26 December 1913 and together they moved to  and had two sons. Michael and his family became well known in the local area and were active members of Carrickfergus Congregational Church.

During the war Michael served as a trimmer with the Royal Naval Reserve enlisting in March 1915.  Late in the war he was serving on board HMS “Neptunian”, a fishing trawler that had been hired by the Royal Naval Reserve to carry out minesweeping duties.  The British steam trawler was built in 1913 by Cochrane & Sons Shipbuilders Ltd. and owned at the time by East Riding Steam & Fish, and based out of Larne.  On 27 October 1918 “Neptunian” sank 5 miles off Altacarry Lighthouse, , following a collision with the HM trawler “Lord Lister”.  Eight survivors were picked up by “Lord Lister” and landed at ; sadly seven men perished, including Michael Hagan.  His body was never recovered from the sea and he is forever remembered on  Naval Memorial.

Carrickfergus remembers today:  Riflemen John Butler - 9064 & James O'Neill  - 9183 2nd Battalion Royal Irish Rifles.  Both lived in Carrickfergus prior to enlisting, they were both members of the Roman Catholic church in the town and were already serving in the British Army when war broke out in 1914.  They were posted to France with the 2nd Battalion in August 1914 and following heavy were killed in action on 27th October 1914 during the  of Neuve Chapelle.  Their bodies were never recovered and they are forever remember on Le Touret Memorial, Pas de Calais France.

John Butler was born in Whitehouse the son of John and Jane Butler (nee Gormley) and lived in Fairymount Carrickfergus.  A Pre-War Regular serving with the Royal Irish Rifles he was posted to  in August 1914 with the 2nd Battalion.  He was killed in action on 27 October 1914 during the  of Neuve Chapelle, his body was never recovered and he is forever remembered on Le Touret Memorial Panel 42 and 43.  His two brothers William and Martin also killed in action.

James O'Neill  was born in the Shankill area of  in 1878 the son of James and Lizzie O'Neill.  He grew up in the  area of Carrickfergus and by 1911 was working as a chimney sweep and living in Davy’s Street with his wife Margaret O'Neill and their children Nicholas and Margaret. It is not clear when James joined the army, he was either a pre-war regular or a territorial and as such was one of the first to be sent into action in 1914.  He served in  from 11 September 1914 with the 2nd Battalion Royal Irish Rifles and died in fighting during the  of Neuve Chapelle 27 October 1914 aged 36.   James body was never recovered and he is forever remembered on Le Touret Memorial in Pas de Calais .


David Alexander Robb was born in Carrickfergus in September 1882 the eldest child of David and Mary Ann (McGiffen) Robb and brother to Mary Ann, William, Charles, Samuel, Hugh, Thomas, Bella and Martha. David spent his early years in the town before moving with the family to Belfast around 1890. By 1901 the entire family were living on Cosgrave Street in Belfast and David was working at Harland & Wolff Ship Builders. He married Elizabeth Doyle on 26 November 1900 in Trinity Church of Ireland, Clifton Street, Belfast and together they had seven children; Margaret (1901), Elizabeth (1902), Mary (1905), David Alexander (died aged 7 months in 1907), Samuel Hugh (1908), Agnes (1910), Jane (1913), and William John (1915).


David and his young family moved to 16 Portland Street Belfast in 1902, it was here he was living when he joined the Antrim Royal Garrison Artillery Special Reserve in Carrickfergus in August 1908 aged 23. David’s medical file reported him to be 5 foot 5 inches tall with black hair and brown eyes. He took part in the two week annual camp each summer between 1909 and 1913, during which time he completed various military training courses. David continued his main employment at Harland & Wolff throughout his reserve army career and by 1911 the family had relocated to Southwell Street in the city.


As war loomed in 1914 the reserve army training was stepped up and David reported to Carrickfergus in June and July for additional drill. He was mobilised on 5 August 1914 and posted to the Antrim Garrison Artillery Coastal Defence. In January 1915 he is charged with misconduct (the details are unclear) and is sentenced to 28 days detention. Perhaps as a result he requests a transfer to the Royal Irish Fusiliers and in June 1915 is posted to the 4th (Reserve) Battalion Fusiliers who were based in Carrickfergus at that time.


Following a period of training he is sent to the Balkans on active service in October 1915; conditions taking their toll on him he is forced from action less than a month later with dysentery and sent to the divisional hospital in Salonika. He returned to active service after four months recovery and remained in Salonika until November 1917 before being deployed to Egypt and Palestine as part of the Palestine Campaign.


In April 1918 David is deployed to France with the 6th Battalion, embarking at Port Said and arriving at Marseilles on 27 May. It appears after arriving in France he was assigned duties at the Battalion depot where he suffered successive bouts of illness in June, July and September 1918 all requiring hospital treatment. Unable to fight off the affects of illness or disease David died at 7th General Military Hospital France on 26 October 1918 and was buried at Terlincthun British Cemetery, Wimille (France) location VI. C. 48. (pictured) 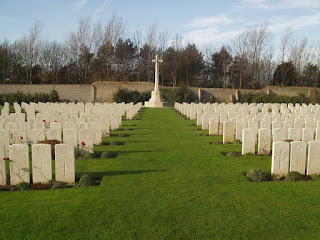 News of his death was passed home to Elizabeth and the grieving family who by now were living on Vere Street, Belfast. Elizabeth received the war windows pension and lived in Belfast until her death in 1959.

Get your copy of the Carrickfergus Roll of Honour

Limited Edition copies of the Carrickfergus Roll of Honour are still available.

The CROH is a 400 page publication that contains details on all men from Carrickfergus, Greenisland and Whitehead who fought and died during the Great War.

To order your copy you can follow the link and send a PayPal payment of £20.00, leave your address and I will arrange personal delivery.

Profits from all sales of the CROH will be donated to the Carrickfergus Branch of the Royal British Legion and it is hoped we can raise over £2000 for the Poppy Appeal.

If you don't wish to use Paypal you can contact me directly on 07413245444 or buy a copy at the Carrickfergus Museum shop  or Robinson's Shoes in Market Place.

Thank you again for the continued support. 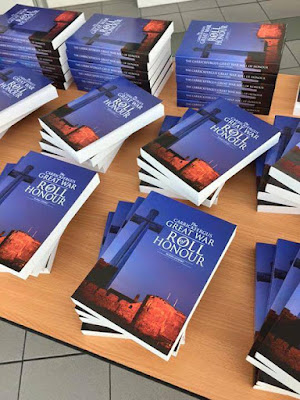