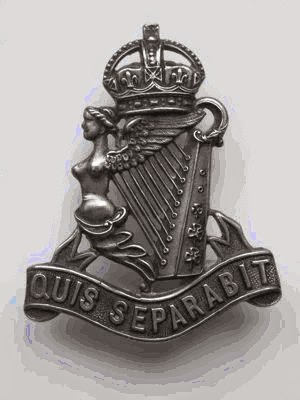 REMARKS; William James Clawson was born in Carrickfergus 1893 the son of John and Henrietta Clawson and brother of Lizzie, Maggie and John.  In 1901 he is listed as a school boy living with his family in Irish Quarter West.  The entire family were members of St Nicholas Church of Ireland and William was an active member of Joymount Invincibles Orange Lodge 947.  Prior to the outbreak of war he was working as a labourer in the salt works and living with the family in Wilson’s Place, Carrickfergus.  When war broke out he enlisted into the 12th Battalion Royal Irish Rifles in September 1914.

He suffered a gun shot wound to the shoulder in France 7th June 1917 during fighting at Messines Ridge  and was sent to hospital in Belfast and Whitehead between 27th July 1917 and 13th August 1917.  On his return to duty he was transferred to the 18th Battalion.  Spent 3 months in Portobello Military Hospital Dublin between December 1917 and March 1918 with gonorrhoea.  Following this he was charged with desertion in June 1918, the war etc having clearly taken its toil on him.  In March 1933 while living in Davy’s Street he receives a letter from the war pensions department informing him that war gratuity is forfeited as a result of his desertion and this would not change.  His trail for desertion was dispensed of and eventually he was recognised as being fully discharged from the army.  The judgment against him seems very harsh especially given the difficult challenges these men had to confront, equally harsh would have been the lose of war pension that William should have been entitled to following 3 years on the front lines.

At this stage I know nothing more about William's life except that he is another of the many forgotten men who fought for King and Country but were lucky enough to return home.  He, like all those who served, is a hero and should always be remembered.

#LestWeForget
Posted by Unknown at 05:16