Today Carrickfergus remembers Sergeant Thomas Dick, son of Adam and Annie Dick from Carrickfergus. Serial number 1798176 - a Lancaster Bomber rear gunner in 12 Squadron, Royal Air Force Volunteer Reserve based out of Wickenby RAF base.  He was shot down and killed on a bombing run over Stettin, Poland on 30th August 1944 aged only 19.

The bombing raid on Stettin on the evening of 29th/30th August 1944 involved 403 Lancasters and 1 Mosquito of 1,3,6 and 8 group (RAF), in total 23 Lancasters were lost.  Thomas squadron had 12 aircraft involved in the raid, reports in the aftermath report heavy FLAK over the target area, his aircraft Lancaster PD273 was the only one from 12 Squadron that did not make it home.


PD273 was captained by F/O J.H. Spurrs, he along with Navigator F/O J. Cordner, F/O P.L. Richardson, F/O K.J. Chambers and Sgt. A. Madelaine all managed to parachute out, all were taken prisoner of war.

Sgt. A. Madelaine Flight Engineer recalls his experiences on board.

We left Wickenby in daylight, crossing the North sea below Radar height and climbing to our operating altitude just before crossing the Danish coast.


Oven Denmark I suddenly noticed trace appear between the fuselage and the Starboard inner engine, coming from the rear. I told the pilot who corkscrewed Port and the enemy was evaded. I had felt the trace hit something solid so on the part of the route over Sweden I checked the engines and fuel system which appeared to be undamaged, though there was some tailplane damage that effected the trim.


Approaching the target we were told to descend below the cloud layer by the Master Bomber and we started our nun at 10,000’. The flak was extremely heavy and we had to turn away to avoid debris from a Lancaster that exploded alongside us.


Suddenly the mid upper gunner reported a fire beneath him and I started to don a portable oxygen bottle in preparation for going down the fuselage to help douse the fire. The navigator passed me on the way to the bomb aimers compartment breaking my intercom, connection. Looking down the fuselage all I could see was a white glow and a thick white vapour. Out of this came the wireless operator wearing his parachute, he stopped me from entering the fuselage to attend to the fire and indicated that I should join him in the bomb aimers compartment. The pilot then indicated that I should leave, I left, noting that all the engine were still running.


I saw the wireless operator leave the aircraft and immediately open his chute which reminded me to open mine. Smoke was rising to 10,000’ and I was falling in the target area and worried about landing in a fire.


I landed with a bump on a peninsular with the river on both sides, gathered in my chute, and hid in some bushes. I heard voices and Germans, armed with pick axe handles, passed looking for me. They must have seen my parachute. I moved nearer the water, and was so thirsty that I drank some, having put two purifying tablets in it. I also checked my escape maps and found that the German one was missing. I stayed put all day in hiding and at dusk moved along the peninsular and passing through a built up area reached the country where I decided to be bold and walk down the centre of the road. A light shone on me, and I was in the bag.


I was marched to the town police station past still burning ruins, stripped and searched, and put in a cell for the night. The bed was full of lice so I slept on the floor. After a breakfast of a lump of black bread and some sort of jam I was handed over to two army sergeants. They took me on a tram full of women who were menacing when they realised who I was. One of them wearing a swastika who appeared to have authority quietened them down. The tram took us out into the country to a Luftwaffe camp and I was handed over to a new escort of two sergeants. The next morning I was interviewed by the Commanding Officer, only giving my name, rank, and number which he accepted.


With my bomb aimer and two gunners from another crew, I went to Berlin by train then on the underground eventually arriving at the aircrew interrogation centre near Frankfurt. I was there for nine days, then on to a holding unit where I met the pilot, navigator, wireless operator, and bomb aimer. We were then split up, the officers to a camp on the Baltic, and the N.C.O.'s to Stalagluft 7.


Due to the Russian advance we were marched West to Luchewald in January 1945, and in April 1945 liberated by the Russians. Our repatriation was delayed so three of us set off on bicycles, we then got a lift on a Russian lorry and finally on a German fire engine being driven by an American. who had liberated it. He took us to the American lines at Magdaburg, from there we went to Frankfurt, Paris, and home to England.

Thomas is buried in a joint grave with crew mate Thomas Dufty in location 6 D 9 in Poznan Old Garrison Cemetery in Poland - the cemetery contains 283 Second World War commonwealth graves, most of which are aircrew who died in bombing operations on Stettin (now Szeczin).  23 other aircraft men shot down that evening and are buried in Poznan Cemetery, 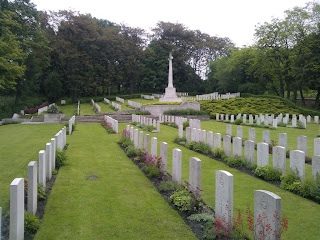