NAME; Barron, Robert James
RANK; Rifleman
SERV. NO; 1159
UNIT/SERVICE; 16th Battalion Pioneer
REGIMENT; Royal Irish Rifles
BORN; Carrickfergus
LIVED;
ENLISTED; Belfast
FATE; Killed in Action, August 11th 1917 near Ypres
CEMETERY; Body never recovered
CHURCH;
MEMORIAL; Ypres (Menin Gate) Memorial – Panel 40
REMARKS; Robert was killed in action in fighting near Ypres on 11th August 1917, he has no known grave and is remembered on Panel 40 of Menin Gate.  At this stage very little is known about Robert, we could assume he was living in Co. Down prior to the war due to his enlistment with the 16th Battalion Royal Irish Rifles who were formed from the Co. Down Volunteers in Lurgan September 1914.  The 16th Battalion was formed out of the 2nd Battalion County Down Volunteers, later renamed the 16th (Pioneer) Battalion Royal Irish Rifles, upon the formation of the 36th (Ulster) Division. This was a unit trained both in field engineering and musketry.

The 16th Royal Irish Rifles played their part on the opening day of the Battle of the Somme. They were ordered to dig a communications trench in no-man's-land under fire, but, owing to the casualties sustained, the order was given to pull back. The trench tramway constructed by the Pioneers had helped evacuate many of the wounded and at one stage, necessitated men of its ranks to stand out under fire and repair the rails that had received a direct hit. The 16th Royal Irish Rifles would, however, remain in the line for a further six days on the Somme front, when the rest of the 36th Ulster Division was relieved. The work of the 16th Royal Irish Rifles continued unabated into August, constructing field defences and trench emplacements.
In September, the 16th Royal Irish Rifles mowed to Dranoutre as the weather turned to rain, although, it did not stop the Regimental Masonic Lodge No. 420 meeting three times, By November, the weather worsened to torrential rain and snow, Mufflers and woollen gloves from home became very welcome. The work of digging and draining trenches, erecting and repairing huts went on into December. Enemy artillery continued throughout the period, shelling the Pioneers at work and in their billets.
From January to March the 16th Royal Irish Rifles were involved in the build up to the Battle of Messines in June 1917. They helped construct railway lines necessary for the transportation of ammunitions and stores to the Front. They continued to construct communication trenches for the men and materials to move through for the assault. Thus, the battalion was dispersed over the Kemmel area, near Ypres, putting all in place. Snow and rain in April slowed the work and made the job of digging and drainage more difficult. In May. the Pioneers worked on building dugouts for the infantry and trench tracks, to facilitate artillery movement. Throughout this period, the different companies working on the front lines were sniped at and shelled with poisonous gas.
The next major offensive, as mentioned, was planned for Messines ridge that summer. The German army held the heights overlooking the salient and the plans of the British General Plumer were put in place to capture the heights on 7th June. Despite the success of the battle, yielding 7,000 prisoners and resulting in 10,000 German dead, the advantage was not exploited and the British army would soon flounder in the mud of the Passchendaele campaign.
As August commenced, the 16th Battalion prepared for the Ypres salient and the Battle of Langemark on 16th August. The 16th Battalion was billeted around Vlamertinghe to carry out infantry training and prepare the roads, over which the heavy artillery would move up to the next assault. In these opening days of August, while the men continued to labour at constructing the road, they were subjected to heavy rain and shelling. 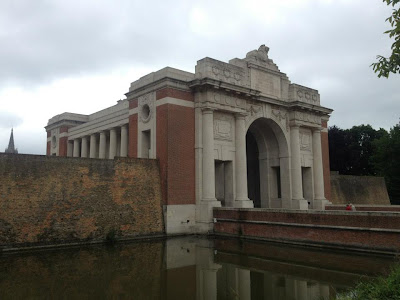