Lance Corporal Hugh McDowell - 2188325 - attached to the Railway Troops Engineers, Canadian Army was born in North Street Carrickfergus on 3rd July 1887.  He was the eldest son of Robert and Elizabeth McDowell and brother to Maggie, Mary, Robert and William James.  The 1901 census lists the family living in 29 North Street, his father was a draper and tailor, Hugh was still a young school boy.   Hugh lived in North Street until 1911, he was an active member of the Carrickfergus Y.M.C.A and an earnest member of the 1st Carrickfergus Presbyterian Church.


Prior to the outbreak of the war in 1914 Hugh left Carrickfergus and traveled to Canada seeking work and to pursue a life in the ministry there.  We know very little of his time in Canada however on 30th January 1917 in Regina, Saskatchewan we know he enlisted with the 7th Battalion Canadian Railway Troops.

Following training in Canada, Hugh along with the 7th Battalion traveled to France for active service arriving in Le Havre on 28th March 1917 with 35 officers and 1003 other ranks. The Canadian railway units played a major role in the construction and maintenance of railways of all gauges, including light railways, for the five British Army areas in France and Belgium.  Due to the essential logistical nature of their work they were regular targets for German artillery and the battalion war diary contains numerous reference to men killed and wounded by artillery attack.

While on active service in France in July 1917 Hugh was seriously injured by German shell fire.  He was quickly evacuated to a casualty clearing station and due to the scale of his wounds subsequently moved to King's Heath Hospital in Birmingham were he eventually died of his wounds on August 14th 1917.

On the 15th August his remain were sent by ship back to Ireland arriving back in Carrickfergus for his funeral on Friday 17th August.     Leaving from the Carrickfergus Railway station at 3 pm a large number of the public assembled to pay a last tribute of respect to this gallant young man.  An escort and firing party of the Royal Irish Rifles accompanied the remains which were placed on a gun carriage, the coffin being covered with the Union Jack.  The Rev Alexander Cuthbert minister of the 1st Presbyterian Church officiated at the graveside and paid tribute to the memory of Hugh.  At the conclusion of the tributes the firing party gave the last salute of three volleys and the “Last Post” was sounded.

Sapper Hugh McDowell was laid to rest in St Nicholas Church Yard and the gravestone is still there today should you wish to visit it. 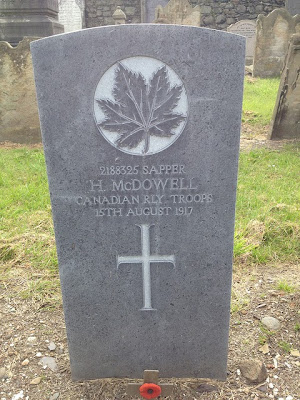