Daniel Cambridge VC (27 March 1820 – 4 June 1882) born in Carrickfergus, County Antrim, Ireland, was an Irish recipient of the Victoria Cross, the highest and most prestigious award for gallantry in the face of the enemy that can be awarded to British and Commonwealth forces.

Cambridge was 35 years old and a Bombardier in the Royal Regiment of Artillery, British Army when he carried out the actions during the Crimean War for which he was awarded the Victoria Cross.

On 8 September 1855 at Sebastopol, Crimea, Cambridge volunteered for the spiking party on the assault on the Redan. He remained with the party after being severely wounded twice, but had refused to leave until the general retirement was ordered, and even then he repeatedly went back into the open to carry wounded men to safety. In the latter part of the day, he sprang forward to bring in another wounded man. While carrying the helpless infantryman to the safety of the trench Daniel was seen to stagger. Subsequently Daniel was found to have been shot a third time, in his right jaw, and, incapacitated, he took no further part in the action. 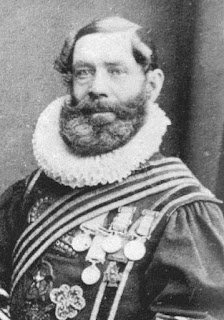 ... I was three times wounded on 8th September. However, it is very little difference now although I suffer from my wounds and still will from what doctors say until my last. I was twice wounded when asked to retire to the rear but that I did by all means declined to do although hard pressed to do so by several officers. But finding I had the strength to stand another chance I advanced a third time with the 3rd Buffs when I received a gunshot wound in my right jaw and by the assistance of several doctors I have at present got 185 bits of bone out of my jaw. And I can assure you that I suffer very much from my head. I may say all over.

Cambridge was pensioned as a Master Gunner after completing thirty-two years' service on 27 June 1871. In that same year Cambridge was appointed to the sovereign’s bodyguard the Yeomen of the Guard.