My apologies for not getting more onto the blog for the last couple of months, I have been flat out and have working tirelessly on the book.  I want to thank the scores of people who have sent me information or made comments on recent posts, this all helps.

12 men from Carrickfergus perished in May during the Great War on land and at sea:


NAME; Spence, Thomas
RANK; Rifleman
SERV. NO; 9385
UNIT/SERVICE; 2nd Battalion
REGIMENT; Royal Irish Rifles
BORN; Carrickfergus
LIVED; Lancastarian Street, Carrickfergus
ENLISTED; Carrickfergus, 1915
FATE; Killed in Action 7th May 1915 aged 23
CEMETERY; Body never Recovered
CHURCH;
MEMORIAL; Ypres – Menin Gate – Panel 40
REMARKS; Thomas was the youngest son of Sarah Spence and a brother to Charles Spence, the family lived in Lancastarian Street, Carrickfergus.   Thomas was killed in action during the 2nd Battle of Ypres near the infamous Hill 60.  Hill 60 is the wartime name for the high ground close to the village of Zillebeke created when a railway cutting was made here in the nineteenth century. By the conclusion of the First Battle of Ypres in 1914 it was on the front line, with positions held on the slopes by French troops and the high ground largely in the hands of the Germans. During the Second Battle of Ypres in April and May 1915 the Hill saw heavy fighting, with four Victoria Crosses being awarded for one day alone.  On May 5th 1915  the Germans retook Hill 60, using gas again.  Most of the trenches on either side of the hill were immediately regained by counter-attack, but not the high ground itself.  The casualties of the British had been very heavy, and two battalions of the 7th Brigade - the 2nd Royal Irish Rifles, and 2nd South Lancashire - were put at the disposal of the 5th Division.

On the 6th the 2nd Battalion R.I.R was ordered to march to a point north of Hill 60 and relieve the Bedfords of the 13th Brigade.  The relief was carried out amidst considerable confusion.  The guides led the Battalion from the ill-famed Shrapnel Corner, on the Ypres - Wytschaete road, along the side of the Zillebeke Lake, in single file, amid falling shells, by a path littered with the wounded and gassed, whose stretcher-bearers had been forced to set them down for a few moments' rest to their aching arms. Having lost their way more than once, they reached Dormy House, the Battalion headquarters, at 1.30 a.m. on the 7th.   And for 2.30 a.m. a bombing attack to clear a communication trench held by the enemy had been planned. Father Gill, the Battalion's chaplain, who describes the relief, states that he saw the scheme on the back of an envelope.  The men were not in position till ten minutes before that hour, utterly wearied already.  Moreover, the barricade, which was supposed to have been mined, did not "go up," and the bombers were met by heavy fire from it.  The attack failed with heavy loss, Captain Burgoyne and Lieutenant Leask being wounded, and of other ranks 9 killed and 16 wounded. It is understood Rifleman Thomas was one on those 9 killed on the 7th May 1915. 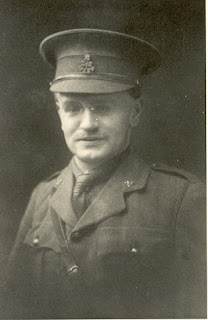 NAME; Walker, Jerome Lennie
RANK; Lieutenant
SERV. NO;
UNIT/SERVICE; Royal Irish Rifles
REGIMENT; 14th Battalion
BORN;
LIVED; Carrickfergus/ Whithead / Belgium
ENLISTED;
FATE; Killed in action 6th May 1916  aged 27
CEMETERY; AUTHUILE MILITARY CEMETERY: France, D.58
CHURCH;
MEMORIAL;
REMARKS; Jerome Lennie Walker Son of F. Manderson Walker and Helen Lennie Walker of Mount Royal, Whitehead, Co. Antrim.  He attended Campbell College in Belfast between Sept 1903 and July 1905. His address whilst at the school was given as 31 Boulevard Vandenpeereboom, Courtrai (Belgium), where he was based when the War broke out. The school magazine, (The Campbellian Vol.III, p.256) adds "The family escaped during the first week, but [Jerome] remained behind and joined the Red Cross Society with his motor, and drove it until the Germans took possession of the town. He went to see the British troops enter Roulers [now Roeselare] and was unable to return to Courtrai, the Germans having blown up the railway. He managed to reach Ypres and stayed there during the three months of the bombardment, at one time living in a cellar for a fortnight". He then travelled to Belfast via London and obtained a Commission in 14th Battalion Royal Irish Rifles on 31 December 1914.  His father was a wealthy and successful flax merchant originally from Holland, I can only assume he must have done some work with Barn Mills Flax Mill during his time in the area given that his name appears on the Barn Mills Memorial Plaque.

His plot, Christ to meet”


MEMORIAL; Portsmouth Naval Memorial Panel 23
REMARKS; Son of Walter and Annie McMaw, brother to Lizzie, William, Walter, Robert and Samuel.  Husband to Elizabeth McMaw.  According to the 1911 census Richard was a labourer before enlisting with the Royal Naval Reserve.
Richard was one of 1266 Crewman who were lost on board H.M.S Queen Mary when it was sunk during the Battle of Jutland 31st May 1916, only 18 of the crew survived.


SERV. NO;  907326
UNIT/SERVICE;  “A Coy”, 56th Battallion
REGIMENT; Canadian Infantry
BORN; Carrickfergus circa 1894
LIVED;  Unknown
ENLISTED; Unknown
FATE; Died 24th May 1917 in France
CEMETERY;  Petit-Vimy British Cemetery, Pas de Calais,  France – B7
CHURCH;
MEMORIAL;
REMARKS; Son of James and Emily A Weatherup, of 13, Trym Side, Sea Mills Park, Bristol, England.According to the Commonwealth War Graves, Jack was a native of Carrickfergus, his family had moved to England and presumably he had moved on to Canada in search of work where he enlisted with the Canadian Infantry.  I can find out no other information about his connections to Carrickfergus at this stage.


MEMORIAL; Mombasa British Memorial
REMARKS; Son of Mr H Powter of King’s Amore, Whitehead. Of all the men I have looked into this one intrigued me as much as any other.  How did a young man from Whitehead end up fighting and dying with a Nigerian Regiment in Kenya.  As yet I have no answers but I hope someone or something with provide an insight soon.


FATE; Lost at Sea presumed drowned  - 06th May 1918 aged 23
CEMETERY; Body never recovered
CHURCH;
MEMORIAL; TOWER HILL MEMORIAL - London
REMARKS; Son of Robert and Jane Adamson: husband of Jane McDonnell Adamson of 7 Fairymount, Carrickfergus.  Born in Eden. He died at sea on or about 6 May 1918 when his ship, the S.S Eveleenwas torpedoed by a German U-Boat, probably U-Boat 72. The ship had sailed from Ayr, Scotland the same day bound for Belfast with a cargo of coal.Two other Carrick men, Robert Blair and Robert Harris were only onboard and they too perished.

NAME; Blair, Robert
RANK; Fireman
SERV. NO; UNKNOWN
UNIT/SERVICE; Mercantile Marine
REGIMENT; S.S “Eveleen” Belfast
BORN; Ballyclare - 1888
LIVED; Tate’s Avenue, Carrickfergus
ENLISTED; Belfast
FATE; Lost at sea presumed drowned  6th May 1918 aged 26
CEMETERY; Body never recovered
CHURCH; Unknown
MEMORIAL; Tower Hill Memorial - London
REMARKS; Robert's ship "S.S Eveleen" set sail from Ayr to Belfast with a cargo of coal 4th May 1918.  The ship was lost and no wreckage was ever recovered.  German U-Boat 72 was in the area and did record the sinking of a ship on the 6th May, but no claim for the Eveleen was ever made.  Robert was the son of Robert senior and Jane Blair.


NAME; Harris, Robert
RANK; Trimmer
SERV. NO;
UNIT/SERVICE; Mercantile Marine
REGIMENT; S.S “Eveleen” (Belfast)
BORN; Ballymena
LIVED; Taylors Row, Carrickfergus
ENLISTED;
FATE; Died / Lost at Sea  6th May 1918 aged 32
CEMETERY; Body Never Recovered
CHURCH; Unknown
MEMORIAL; Tower Hill Memorial
REMARKS: Son of Robert Harris, husband of Mary Harris (nee Blair) of Taylors Row.  Robert's ship "S.S Eveleen" set sail from Ayr to Belfast with a cargo of coal 4th May 1918.  The ship was lost and no wreckage was ever recovered.  German U-Boat 72 was in the area and did record the sinking of a ship on the 6th May, but no claim for the Eveleen was ever made - All 12 men on board perished. Looking at Robert family tree is looks entirely possible that Robert Harris was the cousin of Robert Blair who was also lost on board.


REMARKS; Son of Mrs McCullough of Belfast and husband of Mary McCullough.