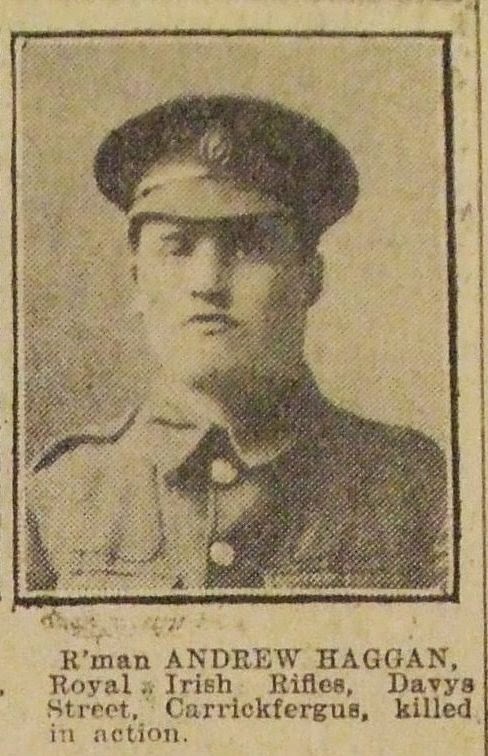 Andrew was born in Carrickfergus in 1896 the son of Andrew and Sarah Haggan and brother of James, Agnes, Jane, Mary Ann, Joseph, Robert and Willie. By the outbreak of war in 1914 he was living with his family in Davy's Street and working as a labourer in the local mill.  Andrew was a proud Unionist, he signed the Ulster Covenant along with his father in Carrickfergus Court House in the presence of Mr W.H Howe on Ulster Day 1912.  He was an active member of  Orange Lodge 787 & 947 and a member of the Central Antrim UVF as well as a member of the St Nicholas Church of Ireland Congregation.

On the 15th September 1914 Andrew along with his best friend and cousin Edward Samuel Haggan and over 100 others turned up at Barn Mills School to enlist into the British Army and were attested into the Royal Irish Rifles "Central Antrim Volunteers" 12th Battalion.  Following training Andrew was sent to the Western Front in 1915 were he served with distinction in France and Flanders throughout 1916 and 1917.  He was killed in action by a shell blast on 15th August 1917 aged 21 during the build up to the Battle of Langemarck the next day.

The `12th Battalion diary for the 15th August reports;

"15th 3am – Btn entrained at Brandhoek and conveyed to Asylum at Ypres. From there they march by platoons to positions for ‘Y’ day previous to the attack on zero day.
Two companies in old British front line east of Wieltje and two coys in Congreve walk. Btn HQ was in Wieltje dug outs. During the day enemy artillery was active on the back area but our casualties were small.
After dusk coys with the exception of B coy moved up to their positions in support of the attacking btns on the Bde front (13th R Ir Rif and 9th R Ir Fus). B coy took up the position to act as mopper s up for the bde. Btn HQ moved to Uhlan Farm. Throughout YZ night the shelling on both sides was very heavy. Zero hour was fixed for 4.45am on the 16th"

Andrew's body was never recovered and he is forever remembered on Panel 40 of the Menin Gate, Ypres.

To make this story even more somber, Andrew's best friend and cousin Edward, with whom he enlisted and had numbers one one part, was killed the very next day during the Battle of Langemarck.  They had grown up together, worked together, enlisted together, served together and died within hours of each other on the same battlefield.  It is sad to say there are so many stories like this and should never be forgotten.

LEST WE FORGET
Posted by Unknown at 03:02