Sergeant Joseph Marshall Loughridge was the son of Thomas and Ellen Loughridge, of Scotch Quarter, Carrickfergus.
Prior to the 2nd World War he worked with the Belfast Banking Company, serving in Head Office.
Having been promoted to Sergeant (Pilot) with Service Number 1101874, he was serving with 87 Sqn Royal Air Force Volunteer Reserve as a Hawker Hurricane Pilot when he was killed on 2nd September 1941.
Loughridge is buried in Carrickfergus (Victoria) Cemetery, Co. Antrim, Northern Ireland.

Thanks to Northern Bank War Memorial for the picture below. 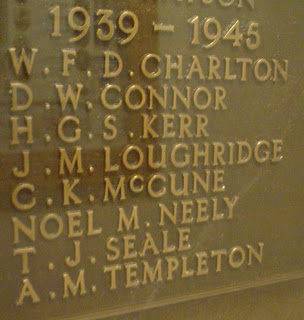