Robert Cambridge was born in Carrickfergus on 1 November 1883 the son of Robert (Snr) J.P and Elizabeth (nee Reid) Cambridge and brother of Eleanor, Mary, Annie, Norah, Louisa and Thomas Reid.

Robert grew up in Carrickfergus and was schooled at Belfast Inst, by 1901 he was living with his extended family on High Street and working as a Clerk.  His family were well known in the town, Robert (Snr) was a respected business man as a grocer and then a timber merchant as well as a local J.P and member of the council.

In 1902 Robert enlisted into the 29th Imperial Yeomanry (Irish Horse) seeing action in the Boer War were he is recorded as being awarded a medal with two clasps.  On his return from war he met and married Anita Wilson in Barton-Upon-Urwell, Lancashire in 1906.  Shortly after the couple emgirated to New Zealand in search of a new life.

By 1916 Robert and Anita were living at 144 Hills Road, St Albans Christchurch (NZ) where he was working as an ironmongery buyer for the distinguished DIC Department Store.  He was also treasurer of the local Veterans Association.

Robert enlisted into the New Zealand army in August 1916 and is described in his medical inspection as being 5 foot 6 1/2 inches, 10 stone with afresh complexion, light blue eyes and black hair turning grey.  On 23rd August he joined the 23rd Reinforcements as a corporal and was promoted to training sergeant on 20th November.  He transferred to G Company on 7th October and on 15th January 1917 was moved to Featherstone Military Camp on the lower North Island.

On 12th February 1917 Robert died suddenly from disease (possibly septic poisoning) - His burial took place from Christchurch with full military honours, his remains were removed from Featherstone Camp where he had died and moved to his home in St Albans.  The service at the graveside was conducted by Rev John Paterson of St Paul's Church at which comrades, work colleagues and members of the Veterans Association attended.  The pall-bearers were all members of the veterans association and were reported as Mr D Lee, Mr G Cresswell, Mr J Timbrell, Mr H Alpe, Mr W Simpson and Mr Bradwick.  Due to the distance from his home, it was only in the weeks after his death that Robert's family in Carrickfergus were made aware of his death by cablegram.  I can find no record of his wife or any descendants in New Zealand after his death.

He is buried in Christchurch (Linwood) Cemetery block 35 lot 264 (pictured).

*With thanks to Inst in the Great War for picture 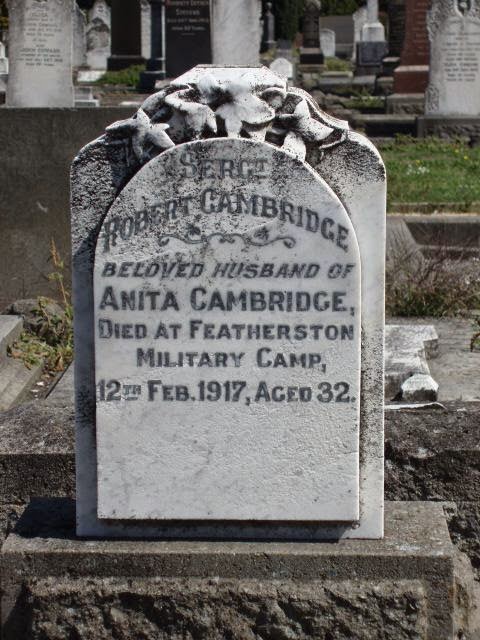