Sergeant Robert Houston was born in Carrickfergus in 1892, son of Ellen and Robert Houston of Joymount Bank in the town. By 1915 he was married with one child and living in Factory Row, Woodburn.

He enlisted with the 12th Battalion Royal Irish Rifles in 1915 and was promoted to the rank of Sergeant. During fighting at the front he was awarded the Military Medal for gallantry and devotion to duty. A captain wrote that when the officer on duty had been wounded Sergt Houston took charge and got the whole situation well in hand. He was making arrangements to watch the gap caused by the blowing in of the trench and was most efficient and dependable. The report also noted that the gallant N.C.O also saved the lives of 5 men under heavy shell fire. Given his levels of commitment and bravery it is hardly surprising Robert was twice wounded during the fighting.

He survived the war but unfortunately I know little or nothing about his post war life. 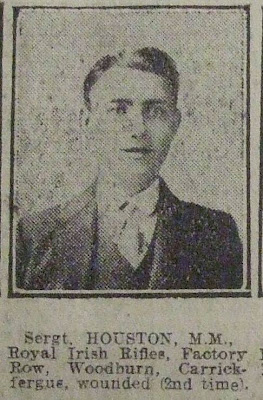